5.0/
Absolutely excellent they went above and beyond !!
Barbara R
5.0/
Went very smooth.
John W
5.0/
Very smooth
Donna S
5.0/
Fantastic job, 2nd time using your company for a move and will definitely do it
MATTHEW K
5.0/
Wonderful Experience!
Ken K
5.0/
Mike, Reuben and Mitarius did an excellent job.
Kathy S
5.0/
Fast workers , took care in making sure everything was wrapped
mary D
5.0/
4 rooms of furniture put into a storage unit In my driveway
Joan G
5.0/
Fast, polite and efficient
MARY T
5.0/
Jake and his team came in and saved the day when our other company was a no show
Susan W
5.0/
Are move team was Thoughtful , excellent quality, and went the extra mile !
Travis B
5.0/
Great crew made for a pleasant move.
Cynthia V
4.0/
Movers were great, but not happy about hundreds of dollars of extra charges
Vanessa H
5.0/
The movers were so kind and helpful and it really made things so much easier.
jessica W
5.0/
Jacob Peterson and his crew were amazing today! Problem solving so quickly!
Monica O

Moving Made Stress-Free With All My Sons Moving & Storage

Making a move to Phoenix or relocating within the Valley? The Phoenix movers from All My Sons Moving & Storage are here to make it easy! We have more than 30 years of experience moving everything you can imagine. We are a local Phoenix moving company that’s seen and done it all. Whether you are moving from a small apartment or need full-service packing for a large house, trust us to get the job done right and at the right price. 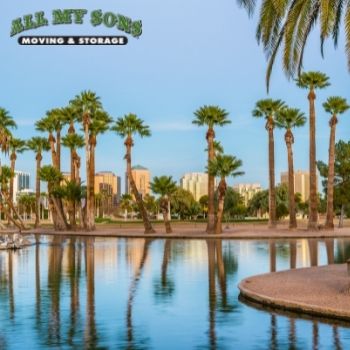 How Many People Are Moving to Phoenix?

The short answer… a lot! Phoenix, Arizona, is one of the fastest-growing areas in the United States. Recent estimates show more than 1,000 people are relocating to Phoenix each week. Many families are moving to Phoenix in search of warmer weather, a lower cost of living, and flourishing job opportunities. Greater Phoenix also remains one of the country’s most desirable places to retire. The Phoenix movers from All My Sons Moving & Storage are experts in moving retirees to their new homes. The best part is we offer full-service packing, so you don’t have to pack a thing!

What Should I Know Before Moving to Phoenix?

If you are moving to Phoenix from a place where you use public transportation to get around, you should know that it’s generally important to own a car in Phoenix. While the sprawling region has more than 100 bus routes and one light rail line, it’s far easier to get around in your own car, even if there is a lot of traffic.

When it comes to the weather, everyone who moves to Phoenix already knows it is in the desert, which means it gets hot! But it’s important to know just how sweltering the weather can be. From June through September, average daily high temperatures are often 99 degrees or more.

The good news is that Phoenix rarely sees any heavy rain, and humidity levels are frequently low. On top of that, sunshine is abundant! Greater Phoenix is called the Valley of the Sun for a reason. The city sees more than 300 days of sunshine each year!

What Time Zone is Phoenix, Arizona In?

One of the most challenging things about moving to Phoenix or anywhere in Arizona can be keeping track of the time! Phoenix is located in the Mountain time zone, which is 2 hours behind the Eastern time zone, 1 hour behind Central, and 1 hour ahead of the Pacific time zone, except during daylight saving time.

It gets tricky when daylight saving time is observed, as Phoenix and most of Arizona do not take part! That means if you’re moving to Phoenix from outside of the state, the routine of “spring forward, fall back” will no longer apply! Phoenix remains on Mountain time all year round.

If you have friends and family outside of Arizona, don’t feel bad if you are always asking each other what time it is! During the observance of daylight saving time, which runs from the 2nd Sunday in March to the 1st Sunday in November, Phoenix time is aligned with the Pacific time zone.

The professional Phoenix movers at All My Sons Moving & Storage are experts in helping explain all of this! We will be happy to help you set your clocks and answer all of your questions! We challenge you to find another Phoenix moving company that provides this kind of personal service!

We have more than 30 years of experience moving families in and around Phoenix. We are a top-rated Phoenix moving company and can handle any type of job. Our comprehensive moving checklist is a great place to get started when you are ready to hire Phoenix movers. Once you know when you are ready to join the thousands of people moving to Phoenix each month, contact us for your free, no-obligation quote, and let us move you while leaving the stress behind!