5.0/
Everything listed below, meets with my approval .Eveyone crew and offide
Jayne K
5.0/
George came right on time and had everything loaded up in 30Minutes!!
Neha S
5.0/
Move went great
Dawn B
5.0/
First Class from Start to Finish!
Chelsey V
5.0/
Finally moving back into a new condo from your storage!
Diane S
5.0/
Both T and Mark were great!!! ?? The Management Mark & Andrew too!! ????
Vasi M
5.0/
super knowledgeable, comfortable, great communication, silky smooth
Leslie R
5.0/
excellent
Everardo F
5.0/
Excellent
Bill Ellen B
5.0/
Derek and his team were efficient, careful and very pleasant! Great experience!
Michelle D
5.0/
The moving crew did an excellent job packing my POD.
paul A
5.0/
Professional courteous and great service
Junior F
4.0/
Great, just some scratches in tv stand and bed frame
Tacito L
5.0/
Professional, efficient, go time and fast but careful. T & Fred great & Opr. Mgr
Vasi M
5.0/
Dayvone and his crew did a great job from the beginning until the end!
Mary Ann Rodolfo S

Moving to Fort Lauderdale With All My Sons Moving & Storage

Moving to South Florida? Looking for a moving company? Call All My Sons Moving & Storage Fort Lauderdale movers now! We will get you a free, no-obligation quote for your custom move. We have more than 30 years of experience, and it shows in everything we do. Our comprehensive moving services cover every aspect of the moving process from beginning to end so that you don’t have to lift a finger. We know how stressful moving can be, so our goal is to make your moving experience as stress-free and worry-free as possible. 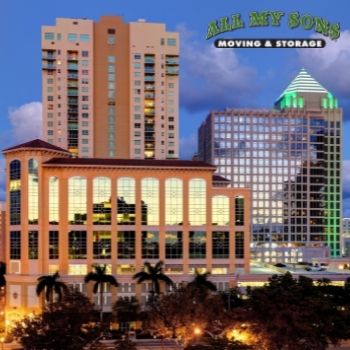 How Far Is Fort Lauderdale From Miami?

Fort Lauderdale is about 40 minutes or 30 miles north of Miami and surely close enough for a fun day trip. One of the most notable events is Art Basel. Generally held the first week in December, 265 art galleries showcase over 4,000 artists. February is the Miami International Boat Show. The event showcases the largest and most influential boats in the world. Also, the Ultra Music Festival held in March is a three-day electronic dance music party.


How Far Is Fort Lauderdale From Key West?

Fort Lauderdale is a little under 4 hours away from Key West at about 190 miles. It generally takes longer to travel there because there is only one access road. US Route 1, also known as the Overseas Highway, has one lane in each direction and top speeds between 45-55 miles per hour. If you prefer to avoid this tedious drive, take a flight directly from Fort Lauderdale-Hollywood International Airport to Key West International Airport, which is about a 1-hour plane ride. Several airlines can bring you there, including Silver Airlines. Try to get down there for a weekend getaway as there are so many events on the Key. Some of the most popular include Fantasy Fest (Halloween extravaganza). You can also enjoy the annual Key West Lobsterfest, Key West Food and Wine Festival, BrewFest, Craft Show, Green Fairy Fest, and Goombay Festival.


How Far Is Fort Lauderdale From Orlando?

Fort Lauderdale is about 3 hours from Orlando, or around 200 miles away. Driving to Orlando is an enjoyable weekend getaway, especially if you love amusement parks. There is Walt Disney World that includes Magic Kingdom, Epcot, Hollywood Studios, Animal Kingdom, Blizzard Beach, and Typhoon Lagoon. One of the best times to go is in September, when Epcot hosts the Food and Wine Festival. Or check out Universal Studios and its three theme parks, including Universal Studios, Universal’s Island of Adventure, and Volcano Bay water park. There are other smaller attractions in the area, as well, like Seaworld Orlando, the marine zoological park.

Where Should I Vacation in Fort Lauderdale?


Is Miami or Fort Lauderdale Better?

When you are ready to move to South Florida, call All My Sons Moving & Storage Fort Lauderdale movers to get your FREE no-obligation quote today! They also offer comprehensive moving services which include every aspect of packing. Our packing professionals are fully licensed and insured, and we treat all of your possessions as if they were our own. Our packing services include complete sorting, labeling, and boxing of your belongings. Also, make sure to view and print the All My Sons Moving & Storage moving checklist!

At All My Sons Moving & Storage, you will find yourself right at home in no time. With over four generations of experience in the moving industry, we know how to move you in a safe and efficient manner. If you want to learn a bit more about the moving process, check out our Fort Lauderdale moving articles. And afterwards, contact us today to receive a free, no-obligation quote!